Based on a Nipah virus outbreak, Steven Soderbergh’s film ‘Contagion’ accurately portrays the panic of a pandemic – something Hong Kong knows well 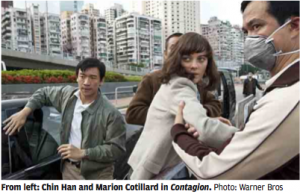 “There’s no need to weaponise the bird flu,” the bioscientific expert in the movie says. “The birds are doing that.”
In Steven Soderbergh’s latest movie, Contagion, a Centres for Disease Control scientist is asked by the US Department of Homeland Security if the growing pandemic could be a new terrorist attack. ‘No, sir, nature strikes back!’
I work with viruses and bacteria. Last week, I took some of my students to watch the movie, which scared and kept us, a bunch of bioscientists, on our seats. Not bad for a Hollywood movie.
Soderbergh and all of us know that there’s no need to sensationalise a pandemic.
The 1918 Spanish flu pandemic killed 50 million people around the world. The virus in Contagion is even worse – it is based on the reallife, deadly Nipah virus which originates in fruit bats, and kills between 40 and 75 per cent of victims, depending on local capabilities for surveillance and investigation. The Nipah virus (called MEV1 in the movie) is accurately described.
Discovered in 1998 in Malaysia, it has led to isolated outbreaks in humans. It is a respiratory virus which causes brain infection (encephalitis). Many of the symptoms in the film are accurate (fever, headache, vomiting, muscle aches, trouble breathing, coma, and death).There is no vaccine and currently no effective treatment.
Thanks to the experience of Sars in Hong Kong, local residents know that a virus outbreak is terrifying on its own. Here in Hong Kong, we can realistically feel the spread of an unknown virus in the movie: empty streets; fear of talking to others and of physical contact; the shutdown of a bustling city.
What’s also realistic from the start of the movie is that the fictional virus originated in China because of low health standards. Also, the close proximity of animals with humans in a hot and humid climate makes for an ideal breeding ground for new viruses. To be sure, the weather is not China’s fault. I had asked my students to watch the movie carefully, and all agreed that the Asian characters are portrayed as being rather sneaky people, even if their motives are understandable. American xenophobia is clear in the movie: the American heroes are, in contrast to the Asians, fearless and noble, as one would expect.
The filmmakers also made a serious scientific mistake in concocting a vaccine within a few days. In real life, it takes months, if not longer, to do so. This inconvenient fact, however, would not have fitted into the film’s fastpaced storyline. To make a vaccine, you have to cause an immune reaction initially in an animal, such as a rabbit, monkey or mice, and that takes time. There are some promising DNA-based technologies that may speed up vaccine development, but none is ready yet. When the movie shows a threedimensional model of the virus, the effect is simplistic and oldfashioned. My students were quite amused. We have much better software now that can display much greater molecular details. In Hong Kong, we now have a new, cheap and reliable bioscientific test to ascertain whether a person is infected by a virus or bacteria. As such, we can isolate even an unknown viral outbreak. The rapid tests, produced by HKUST researchers jointly with biotech companies R&C Biogenius and KSB, require just three drops of blood to indicate whether a person is free of infection or whether he has been infected by a virus or bacteria. Happily, a non-invasive saliva test is on the way. Since the experiences of Sars and bird flu in Hong Kong, local scientists have become much more prepared for a potential pandemic. I am convinced we will witness a global pandemic in our lifetime.
Soderbergh did a great job depicting a realistic viral pandemic. The intensity and the terrible helplessness of the situation is shown very well in the movie. We remember similar experiences in Hong Kong. Contagion is at its best when it shows an all-too-real fear.